Photovoltaics in Germany: has solar power been worth it?

Recently, commentators have suggested that the German experience of providing feed-in tariffs to subsidise photovoltaics [PV] has been a Bad Thing, but much of it is based on a flawed study from the RWI think-tank

Chris Goodall, George Monbiot (twice), and the Low Carbon Kid have all joined in. Jeremy Leggett has picked up the defence several times now. Let’s look at the RWI claims. But first, a trip to the shop …

And I’m back (quick trip, the shop’s just around the corner). It cost me £60 off my debit card, and I came back with a shopping bag full. Someone took a look in my shopping basket, and is now saying that I’ve been wasteful with my spending, squandering my money on expensive trivialities. They made a bunch of claims, and separated them out with lots of padding so that it wasn’t easy to put them next to each other. But because I’m interested in the specific claims, I’ll list them all together.

They claim I’ve paid £6 per apple. They say I bought ten apples. I did, it’s true. They say that £60 was taken off my debit card, and that’s also true. So they divided the £60 by ten apples to get £6/apple. They also claim I’ve paid £30 per litre of milk. They say I bought two litres of milk (I did), they again point out that £60 was taken off my debit card, and £60 divided by 2 litres = £30 per litre of milk. They mentioned that I bought one or two other things, but didn’t list them. They also note that I got cash back, but don’t mention that I got £50 back.

So, we agree on some points – some of their numbers are right, but that’s only part of the story. My shopping trip got me some cash, 10 apples, 2 litres of milk, and some other things. £60 was taken off my debit card. All of these things are documented. But I don’t agree with any of their conclusions. Do you? From what I can see, I spent £10 (£60 was taken off the card, but £50 of that was returned as cashback, and is now sitting in my wallet). With that tenner, I got ten apples, two litres of milk, and some other bits and bobs, including an each-way bet on a fast horse at good odds in a five-horse race: so there’s a good chance that I’ll win a lot more than that tenner.

And so, now back to the RWI report. As we now move our attention from Britain to Germany, we’ll leave our £ behind, and switch to €. RWI make some claims about the German PV industry. Let’s make a shopping list of them: 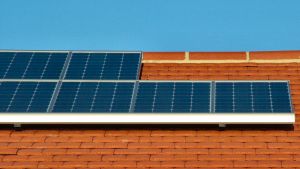 And those are calculated from a net cost of the PV feed-in-tariff, which was €8.4bn in 2008. But we know this shopping-list trick. In 2008, that €8.4bn was only spent one time over, not once for the electricity, again for the jobs, again for the CO2 reduction, and yet again for the expansion of the industry. The costs happened once each year, electricity was generated each year, there was PV employment, CO2 reductions, and industrial growth in the sector each year. (edit – added:) The RWI has used exactly the same cheat as the shopping list trick above.

The German Feed-In tariffs have been one part of a long-term strategy for PV technology, and for German industry. As a result, electricity has been produced, and there were 48,000 PV jobs, and CO2 abatement, and there’s been a reduction in PV module costs of about 27% over the last ten years. Oh, and Germany is now a world leader in manufacturing PV: in 2008, a German company became the largest PV producer in the world. Germany has one other company in the world top ten. They’re both joined in the top ten by First Solar, an American company with manufacturing plant in Germany. So, a world-class industrial base there, with worldwide demand currently rising: last year the global market was roughly €28bn (us$38bn, converted at today’s exchange rate), and is expected to double over the next 5 years, and to continue to grow over the next 20 years.

So what should Britain do?

The German policy was one to stimulate industry and technology, and has been hugely successful in achieving what it was designed to do. The feed-in-tariffs were complemented by other supportive industrial policies. It was not a short-term energy policy. If Britain is serious about building a world-class PV industrial base, then it should put in place a package of industrial policies to make it happen, including a large research & development programme; not just the feed-in-tariffs.

OK, that’s British PV as an industry, supplying to the world. Does PV have a place as a utility-scale producer of electricity in Britain?

Yes, there is a very good case to be made, that of our current final energy demand of 205GW (82kWh per person per day), there’s a role for about 5GW (2kWh/p/d), based on current technology. Now, that’s less than 3% of current demand, but it’s still a heck of a lot of PV: it would need about 50GW of installed capacity. The feed-in-tariff is one of the ways we’ll reach that goal, but it won’t be enough in and of itself, and clearly it’s of benefit to Britain if that capacity comes largely from native industry. The advantage of having at least 1-3% of our energy supplied by PV, is that it complements other supplies very well: it’s sunniest in summer, wind blows most in winter. If we were to have another long hot summer like we did in 1976, there’d be plenty of electricity from PV to make up for the low winds. And if global climate change brings about more and hotter summer days in general, we’re going to get a lot more electricity demand for air conditioning, which PV will be perfectly placed to meet. And finally, by adding an extra generating technology into the mix, it increases overall system reliability. As to what the coming decades will bring in new PV technologies, Britain is already at the leading edge of innovation, and we should cultivate that.

A technical footnote on the FIT, the ETS, and emissions

The RWI report also claims that since the EU Emissions Trading Scheme [ETS] was introduced in 2005, then the feed-in-tariff no longer causes net reductions in greenhouse gases. Now, wouldn’t that be an odd thing: if it did create reduction before the ETS, but once the ETS introduced a carbon price, through the market for permits, then those reductions vanished? Economically unlikely, you’d think, and you’d be right. Although the ETS seems to be holding emissions at the level of the cap, there are global consequences to the energy economy from what happens in Europe, and the German feed-in tariff has been no exception. It has brought down the price of PV across the world, by pushing the industry further along the experience curve, and by spurring on new innovation. As the global price of PV drops, it’s cheaper throughout the world (not just within the ETS) to reduce carbon emissions by buying PV. So there are global carbon savings as a result of the German feed-in-tariff.
(Edited 10 June 2010 to fix flaws)