A plurality of wind: a landmark on the road to cleaner electricity

On 17 December 2015 Britain passed a new landmark on the road to cleaner electricity: for four hours, from 03.00 to 07.00, the grid had a plurality of wind: wind was the largest generation type on the grid: there was more wind generation than generation in Britain from gas, or from coal, or from nuclear, or any other domestic source. That was the case for the four hours as a whole, and for each half-hour within that four-hour period.

END_OF_DOCUMENT_TOKEN_TO_BE_REPLACED

Is land area a barrier, or a significant constraint, to achieving 100% renewables?

END_OF_DOCUMENT_TOKEN_TO_BE_REPLACED

Another booming year for Chinese renewables

And so to the detail.

Half of the 104 GW of new capacity is renewables; 47 GW is thermal plant (predominantly coal and fossil gas) and 5 GW is nuclear. 22GW of the renewable capacity is hydro, 20 GW wind, and 11 GW solar.

I’ve updated this post on 2015-03-12 with the more specific statistics now available from China.

Generation from wind increased to 17.88GW (average electricity production) this year, from an estimated 16GW last year. Hydro generation increased by about 17% to 122 GW. China now has 27 GW of grid-connected solar capacity, and 20 GW of nuclear capacity.

Output from thermal (coal & gas) plants dropped in 2014, because although thermal plant capacity increased by 5.9%, this was outweighed by the relative decrease of 6.3% in its capacity factor (from 57.3% to 53.7%, an absolute change of -3.6%, which is a relative change of -6.3%). In addition, the efficiency of coal & gas plants went up, meaning that the consumption of coal & gas for electricity generation decreased in 2014.

It’s been a remarkable few months for wind generation in Britain, Feb 2014 – Jan 2015, and the last of those two months in particular. Several records were broken, and re-broken.

You can see the live British grid data, including wind generation, here; and here’s a version for mobiles (cellphones) and other small-screen devices.

The half-hour starting at 06.00 on the morning of 18 October 2014 saw the highest percentage contribution of wind (penetration) to total demand: 23.5% from metered windfarms; 32.9% from all windfarms.

Records for electricity generation from wind in Britain

Following on from this question on the Sustainability Stack Exchange about decarbonisation in Eire, and a discussion on the Claverton Energy Group about the British and Irish grids, I took a quick look at the data on carbon intensity and wind generation in the Irish grid. This uses all the available data at time of writing – 38 months, from November 2008 to the end of December 2013. 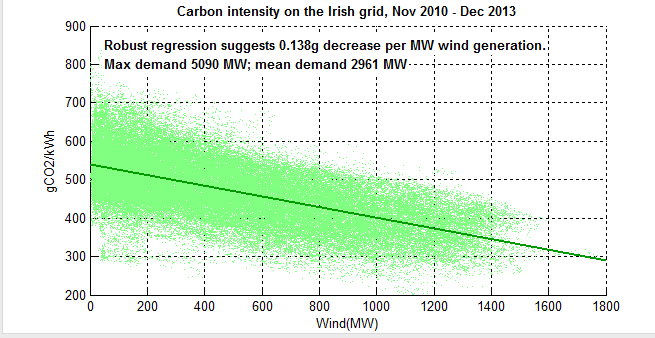 I’ve used Robust regression, as there are some reporting errors in there (further cleaning has refined the estimate to 0.136 from 0.138).

The y-axis is baselined at 200 gCO2/kWh, because there’s very little real data below that line at present.

I note that Eirgrid has heat-curves for every thermal plant on the grid (which is how they calculate the carbon intensity). Does National Grid have anything like that for GB? Do you? Would you like to share them with me?

And re the data-cleaning – just in case anyone else downloads the wind forecast and generation data, note that every year on the last Sunday in October, the wind data for each of the four quarter-hours when the clocks go back is duplicated.